Even though there are over 100 search engines online, most of us head straight to Google or Bing.

The two search engine giants dominate the industry. And they provide your gateway to millions of customers through PPC, SEO, and quality content.

But the Google vs Bing debate is a tricky one. Which platform is best for businesses and which is best for your average user?

Well, we’re here to explain which one you should prioritize and how the two search engines perform when they go head to head.

The History of Search Engines

The first search engines were around before the WWW. Two early examples include WHOIS (1982) and Knowbot Information Service (1989).

Then in September 1990, along came Archie. It was a primitive FTP service hosting an index with directory listings users could download.

Here it is in all its glory—a grey wonder that set the foundations for the future.

In late 1993 there was W3Catalog, the web’s first proper search engine.

It opened the floodgates and the likes of Lycos, Yahoo!, Daum, Magellan, Ask Jeeves, and Yandex threw themselves into the market between 1994 and 1997.

But it was Google and Bing that capitalized on the full potential of the industry. And they’ve come to dominate the market. How so? Let’s have a gander.

Microsoft entered the industry in 1998, first with MSN Search before rebranding to Windows Live Search in 2006.

Then it became Live Search in 2007, before rebranding once again in June 2009 as Bing.

There was another name change in October 2020, with the official title now standing as Microsoft Bing.

It was a long and winding road to reach this point! But it’s now the third-largest search engine in the world.

Larry Page and Sergey Brin met at university in 1995 and created Backrub. The name became Google in time for the business’ launch in 1998.

Alongside its industry-defining algorithms, it also began selling search terms which, as we know, revolutionized their businesses profitability and the digital marketing industry.

It also shook up office life with a focus on company culture. Such as:

The Differences Between Google and Bing

At first glance, they look the same and feature a prominent white box for search terms.

But with different algorithms, the results for businesses in content, PPC, and SEO are essential to understand. Here’s what you can expect.

Google uses a series of algorithms (including the famous PageRank) to determine rankings in its SERPs. To do this, it has spiders crawl across web pages and provide a relevancy score.

It looks for ranking signals such as query type, relevance, source expertise, and location.

Google’s approach is ever-evolving. For example, it now uses BERT, this is explained on understanding searches better than ever before:

“By applying BERT models to both ranking and featured snippets in search, we’re able to do a much better job helping you find useful information. In fact, when it comes to ranking results, BERT will help search better understand one in 10 searches in U.S. English.”

Bing uses a similar approach with its BitFunnel indexing algorithm.

It’s also rapidly adopting features such as intelligent search (A.I. powers this). As Microsoft puts it:

“Intelligent answers leverage the latest state of the art machine reading comprehension, backed by Project Brainwave running on Intel’s FPGAs, to read and analyze billions of documents to understand the web and help you more quickly and confidently get the answers you need.”

By using the search engine, you can also take advantage of Microsoft Rewards. You can redeem the points you earn at the likes of Amazon and Starbucks.

Sure, this doesn’t make Bing better than Google. But at least your searching can result in a free coffee.

But what about search results? We had a look at how Lunio looks on the two sites. And? There’s a striking similarity between the two.

We performed a search to show off the differences for the search term “digital marketing”. This is what Google came back with. 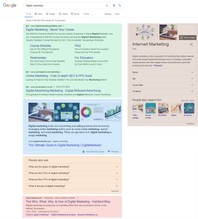 At the top in the green section we have Google’s primary money maker, their PPC search ads which are displayed on most results.

Just underneath the ads in the blue, it leads with a featured snippet explaining what digital marketing is and visuals from the featured webpage.

Below that in the orange highlight it shows similar questions related to the query (in this case “digital marketing) that people search for.

And finally in red at the very bottom the normal organic search results.

To the right hand side on desktop devices only it shows more helpful information about digital marketing from trusted sources such as Wikipedia.

As you can see, users immediately have an answer and have plenty of options for further reading. 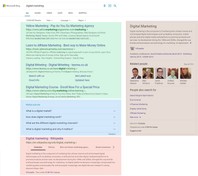 Just like Google it starts off with PPC ads, followed by a breakdown table of common PPC questions, before finally showing the other organic webpages at the bottom.

Also like Google it shows a side bar on the desktop depending on the search term. In this case, it also has information from Wikipedia for further reading.

Comparing the two together, although they are very similar, Google clearly understands what users are searching for and presents a trustworthy article instead of just a Wikipedia page.

This hints towards Google’s capacity to provide granular, detailed responses. Its algorithms lead the industry, and this is an example of it providing a better response than Microsoft.

But, from a business perspective, what about your PPC goals?

Name changes aside, the difference between the two platforms is dramatic. For advertisers across the world, the critical factor is the CPC.

Here’s a demonstration of the U.S. market.

Why is Bing cheaper? As it has a lot less competition for advertisers bidding. This means clicks are more cost-effective, and you’ll get more ROI.

However, you’ve also got to remember the traffic amount is a lot lower compared to Google. So, you may have to pay more to land conversions.

Ultimately, with Google, you’re paying more to outdo the competition. But you get an enormous amount of prospects seeing your campaigns due to the search giant’s success.

It’s a total search powerhouse, owning 87.96% of the search engine market. And it’s not losing that advantage anytime soon.

Bing handles 4.58% of the internet’s queries.

That’s still an enormous chunk of traffic, but it pales in comparison to its competitor’s dominance of the industry.

That leads us onto the big question—why is Google so far ahead of its competition? This comes from its constant focus on providing the very best results to its users.

And with its advanced and ever-evolving algorithms, it provides users with accurate and relevant results. Always.

Plus, Google is lightning-fast, reliable, secure, and has also bought many other hyper-popular platforms, most noticeably YouTube.

And that creates brand familiarity. If you’re an online user, you’re using Google sooner or later. And why not? Its reputation far exceeds the competition.

For advertisers, Google has an enormous amount of traffic (but higher CPC costs) while Bing offers cheaper campaigns—but fewer prospects.

Which is better for your business?

Arguably Google, as it’s so successful and you’ll have a far greater pool of potential customers. Although competition is high and you need every trick in the book to make your campaigns impactful.

You can read our PPC tips guide for help there.

But if you’re on a lower budget and need to save money, Bing’s rise in market share is a tempting proposition.

You can still reach a huge audience and at a cheaper cost.

For us? As much as we like Bing, we lean towards Google. Why? As it’s perfected its art and provides excellent search results.

For advertisers? We’d go with Google, simply down to the enormous amount of daily searches users complete on the site.

To maximize your PPC campaigns, you want as many consumers as possible to see your ads. And that’s what Google provides.