Have you ever seen an advert that has left you scratching your head? Well, you’re not the only one.

Advertising can often be very hit or miss depending on the target audience and the marketing team in charge. Sometimes marketing departments can hit the nail on the head and deliver an incredible marketing campaign to impress their client and boost sales.

Other times, marketing departments can get it completely wrong and produce terrible adverts that cause a lot of controversies, often resulting in a boycott and loss of sales.

Over the decades, there have been multiple examples of companies delivering terrible campaigns that have been talked about for all the wrong reasons. These whoopsies can affect any company no matter how big or small and have lasting impressions.

To give you an idea of terrible ad campaigns that have caused a lot of controversies, we’re taking a look at some of the most memorable commercials and ads from recent memory.

The Ad: Starting off our list is this beach body ad campaign by health supplement supplier Protein World. Released in 2015 across London and New York billboards, the ads pictured a bikini-clad girl with the slogan “Are you beach body ready?”

The idea was to promote their supplements to users who wanted the perfect beach body for summer. However, the ad quickly received plenty of backlash via social media and even resulted in many passersby vandalizing and writing over the ad.

The Problem: The problem with this ad campaign was the fact that is promoted “body shaming”. Many feminist groups noted that the wording of the ad insinuates that the body in the picture is the only “acceptable” beach body. This means that any other body type not like the one in the picture is “unready”.

Despite the backlash from the public the ad received a lot of publicity and press coverage. Protein World went on to make a reported £1 million profit from the £250,000 they spent on the advertising campaign. Although it caused a lot of controversy around the world, it somehow still managed to boost the company’s sales.

Hopefully next time they run an ad campaign they’ll be able to get the same success without offending as many people as possible.

The Ad: The ad in question, (that you can watch above) looks pretty harmless and normal as far as commercials go. A random guy gets asked to do something, and he goes along with it since he’s “up for whatever.”

In a series of events (and short ads) he ends up playing table tennis with Arnold Schwarzenegger at a OneRepublic concert (like you do). No violence, no swearing, no nudity. What could possibly be controversial about this ad?

The Problem: If you’ve watched the commercial above, then it might not seem controversial, but it wasn’t the TV commercial itself that was the problem. Instead, it was the overall premise of the ad campaign, especially with the hashtag #upforwhatever.

The printed messages on the beers themselves actually said “the perfect beer for removing no from your vocabulary for the night.”

Considering the role alcohol frequently plays in rape cases, it definitely wasn’t the best idea to promote that kind of message on the side of their beers.

The ad received a lot of backlash from customers who said the campaign “encouraged and promoted rape” by printing those messages on their bottles. In the end, Bud Light apologized and pulled the entire campaign. Hopefully next time they’ll think twice about what their campaigns are telling customers to do.

The Ad: Consider the previous ads we’ve had on this list, this one probably stands out as the most controversial. The campaign features a range of world leaders kissing, including the likes of Obama, Merkel, and Sarkozy. According to the company behind the ad, the theme focuses on the kiss as it’s a universal symbol of love.

The ad ran across many countries on large billboards during its 2011 launch which as you can imagine caused a lot of raised eyebrows. This wasn’t the first time the group had launched controversial ads before, in fact, their previous ads showed a priest and nun kissing.

The Problem: Controversy for this ad campaign arose in many different ways. The first was the use of world leaders without their consent. In fact, one of the ads features Pope Benedict XVI kissing a top Egyptian imam which was quickly removed after being condemned by the Vatican.
The ads were met with so much backlash that some people started to tear the ads down themselves. Despite the backlash, Benetton never withdrew or apologized for the campaign and even went on to win the prestigious Cannes ad festival award.

The Ad: Pepsi is known for its high budget ads which usually feature famous faces such as Lionel Messi, Beyonce, Pink, Michael Jackson, and Beckham to name a few. This ad was no different and featured celebrity fashion icon, Kendall Jenner. Released in 2017, the ad (which you can watch above) shows Kendall joining a protest outside after removing her black wig and makeup.

She then proceeds to give a can of Pepsi to a police officer during a stand-off who then smiles and the crowd cheers. Kendall Jenner has saved the day, all thanks to Pepsi!

The Problem: During the time the advert was released, there were many protests and riots taking place in America over the #BlackLivesMatter campaign. The ad took a lot of “inspiration” from these protests and fundamentally undermined the whole point of the protests. In addition to this, the ad also received a lot of criticism for how Pepsi was responsible for “saving the day.”

Within 24 hours of releasing the ad, Pepsi faced a lot of criticism from online users over the ad and had to release an official statement while also pulling the ad.

The Ad: Nivea is a German skincare brand that is known for manufacturing antiperspirants, face creams, and plenty of other cosmetics. To promote one of their new invisible antiperspirants, Nivea decided to use the tagline “white is purity” on their social media campaign. The ad featured a woman wearing a white top while looking out the window with the slogan in bold blue letters.

This ad was just one of a number of other ads from the same campaign to promote their new product.

The Problem: As you can probably see from the advert above, the choice of words for this campaign was very poorly chosen. To make things worse, they specifically aimed the campaign at people in the Middle East which caused many people to call the advert racist.

In addition to this, many right-wing groups started to promote the advert with some going as far as saying Nivea was the official alt-right antiperspirant. Eventually, Nivea released a statement about the ad and immediately withdrew it after realizing the wording and context caused offense to many viewers.

The Ad: Similar to Nivea, Dove is a popular skincare brand that targets numerous countries around the world with their moisturizers, deodorants and hair care products. In 2017, Dove released a social media ad on their Facebook page of a black woman “transforming” into a white woman.

The advert showed a black woman removing her top to reveal a white woman underneath after using Dove’s body lotion. As you can probably tell, there are many things wrong with this advert.

The Problem: The controversy caused by the advert is as clear as day. Not only is the advert racist, but it’s also insulting to viewers.

The campaign was instantly removed from Facebook while the owners of the brand Unilever, released a statement apologizing for the advert. The scary thing about this advert is that it must have been approved at some point during the marketing process, which makes it worrying that nobody thought it would cause offense.

This also wasn’t the first time Dove received backlash over their ads. In 2011 they came under fire for a similar image showing the transition of a black woman to a white woman after using their lotion.

Tweets from users showed that people don’t just forget about these types of ads overnight. A bad ad campaign can leave you with a negative reputation for years.

2020 might be over, but there are still some ads we can’t seem to get out of our heads. Not because they were good, but the complete opposite. Maybe you saw some articles in the news regarding these ads or perhaps this is your first time seeing them.

Whatever the case, these ads caused a lot of controversy in 2018 for different reasons. Here’s why.

The Ad: LUSH is a UK based handmade cosmetics manufacturer that has stores all across the UK and USA. In 2018 LUSH released its spy cops campaign across all their UK stores which raised many eyebrows. In addition to running the advert across all of their UK shops, they also produced several online articles explaining the issue.

The campaign focused on “spy cops” or undercover police who infiltrate political groups and form relationships in order to gather and collect data on subjects.

There have been many stories of police offers having sexual relations with these campaigners all while hiding the truth from their real families. The ad was basically a whistleblowing campaign to raise awareness of the police’s tactics and the devastation it brings to families and children.

The Problem: The main issue with this campaign is that it came across as very anti-police to most of the general public. In fact, there were reports of people complaining and becoming very aggressive in the stores, resulting in LUSH having to call the police. Due to the negative reception of the ads, LUSH ended up pulling them and releasing an official statement on their website. 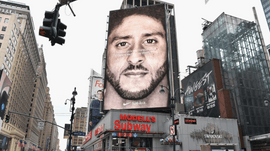 The Ad: Nike is undoubtedly one of the biggest companies when it comes to sportswear and sports brands. Known for its sports footwear, clothes and accessories, Nike regularly invests in multi-million-dollar ad campaigns featuring the likes of famous sports athletes.

In 2018 Nike launched an advert featuring the American quarterback Colin Kaepernick who at the time was known for protesting over the American national anthem during football games.

The ad was plastered on billboards all over America with the tagline “Believe in something. Even if it means sacrificing everything”. The line being a nod to Kaepernick’s previous actions of not standing for the national anthem in protest over the treatment of ethnic minorities.

The Problem: After Kaepernick refused to stand for the national anthem, many viewers became angry at him and viewed him as anti-American. The fact that Nike was using him in their ads made many people believe Nike was also anti-American. This sparked a lot of controversies online with many social media users posting pictures of themselves destroying Nike products, along with the hashtag #JustBurnIt.

However, despite the online backlash over the campaign and casting of Kaepernick, Nike reportedly made over $6 billion in sales and saw online sales grow by 31%.