With more people shopping from home since the pandemic, there’s been a global shift towards increased digital spend. And The World Federation of Advertisers now estimates the digital ad market will be worth $500 billion by 2025.

But wherever money goes, fraud inevitably follows like a dark shadow. In fact, a recent report from the Association of National Advertisers found that ad fraud costs businesses $120 billion globally. And it’s certainly showing no signs of slowing down. For fraudsters, the risks are low and the incentives only continue to grow by the day.

Recently there have been several high-profile ad fraud prosecutions in the US. For example, In November 2021 Aleksandr Zhukov, the self-proclaimed “King of Fraud” was sentenced to 10 years in prison by the US Department of Justice for his role as the lynchpin of the operation dubbed “Methbot”. Aleksandr and several co-conspirators carried out the digital advertising fraud through a fake advertising network Media Methane, hence the name “Methbot”.

But much like the “war on drugs” law enforcement agencies only successfully prosecute a tiny minority of offenders. The vast majority of digital fraudsters are able to continue running their operations without ever being found out. And it’s costing businesses billions every year, as the stats below attest. That’s why the ad fraud prevention market is growing rapidly. More and more businesses now understand that they need to keep up in the digital arms race against the increasing sophistication of malicious bots and black hat operations.

To help create a clear picture of the scale of the problem, we’ve complied a list of statistics documenting exactly how much money is lost to ad fraud, the mobile advertising fraud landscape, invalid traffic, and click fraud.

The figures are staggering. With exponential year-on-growth, ad fraud continues to be a considerable threat to businesses and marketers across the globe. Here are a few stats on the financial implications of ad fraud cost:

With the exponential rise of social media, and a report by eMarketer showing that we now spend more than 3 hours per day on our smartphones, mobile advertising has become one of the most important channels for marketers. But as ever, the fraudsters are never far behind the latest industry trends meaning mobile ad fraud cost is climbing.

Digital advertising is big business. Even after a dip during Covid-19 lockdowns, it accounts for nearly half of all US advertising spend, and a whopping 89% of that is spent on “programmatic” advertising, or ads bought by algorithms. But invalid traffic and click fraud are also big money-makers for fraudsters:

The Business of Ad Fraud

One of the reasons that ad fraud is so prevalent today is the ease of access and the staggeringly low rates charged by people selling these kinds of black hat services. Here are a few examples to highlight this.

As outline at the beginning, most ad fraudsters are never caught. But there have been several high-profile cases where perpetrators were taken to court and prosecuted.

What You Can Do?

But what can you actually do to protect your business and your ad budget?

Lunio’s advanced click-fraud software automatically prevents clicks from bots and fake users across Search, Social, and Display. Eliminating invalid activity from your campaigns makes your marketing budget go further and allows you to reinvest saved funds back into your best performing ads. It also brings greater clarity to your ad analytics by stopping fake interactions warping your metrics, so you can see which channels and campaigns are really performing and double down on what works best.

Ultimately, all this means your ads are seen by more ‘real’ people, increasing your number of genuine impressions, clicks and conversions with the same ad spend. Want to see it in action?

Give Lunio a try today and see how much you can save. 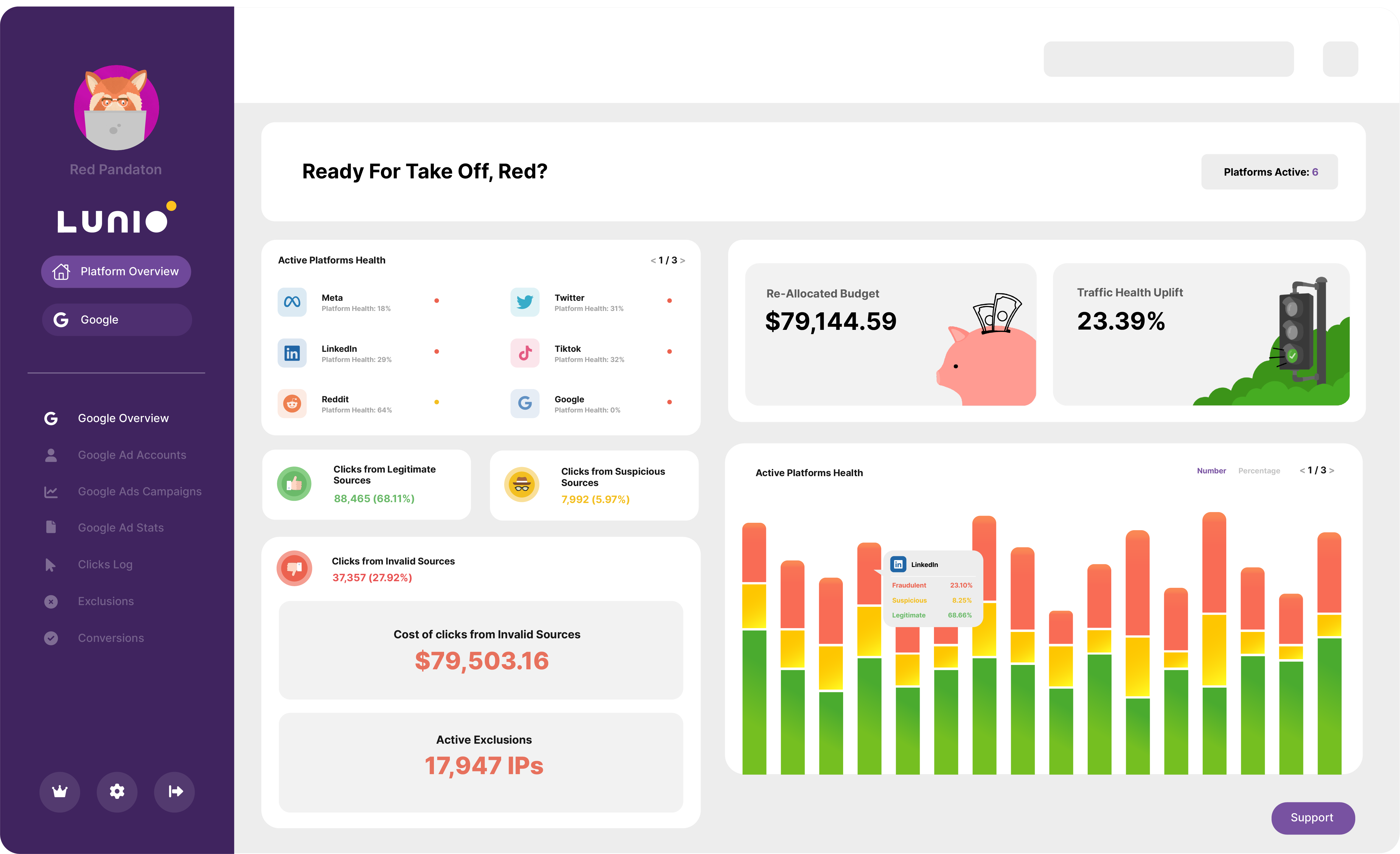