Marketing So Bad, That It’s GoodThe KFC Ad: What Do You Mean, There’s No Chicken?Different Strokes for Different FolksNothing Ventured Nothing Gained

So that last article on The Problem with Good Marketing got me thinking about the not-so-great ones. The ‘so-bad-it’s-good’ ones. It got me thinking of the times when brands have really dropped the ball but then turned it into a marketing win.

Like it or loathe it, there is a place for bad marketing. So let’s take a look at some examples, what we can learn from them, and most importantly, what it all means for you.

Marketing So Bad, That It’s Good

Producing a marketing campaign isn’t cheap. Especially where shooting an ad is involved, with writers, camera crews, actors, music, and special effects to pay for. For an SME, spending this much money on a 30-second ad is a gamble, so inevitably some corners are cut.

Sometimes, ads are deliberately awful. Other times, they’re not. Like this one from Eagle Insurance in 1993:

Ticks all the boxes for terrible, right?

Except this commercial gained a cult following in the Chicago area. As a result of its initial success, producers RDR ended up producing a series of equally unusual sequels, and people still talk about the ads today – pop ‘Eagleman ad’ into Google or Reddit and see for yourself!

There are plenty more ads like this one – all great fun to watch and cringe along to on your lunch break – which goes to show that there’s space even for the worst of the ‘accidentally bad’ campaigns.

Sometimes, though, it’s not the ad that drops the ball, but the brand, leading to a real marketing opportunity if they’re humble enough to accept their shortcomings. Nowhere was that more evident than in the KFC chickenless saga a few years back.

The KFC Ad: What Do You Mean, There’s No Chicken?

In February 2018, KFC were forced to close hundreds of stores across the UK because they ran out of chicken. Ball, well and truly dropped. A few days later, though, this ad appeared on full-page spreads in various press outlets: 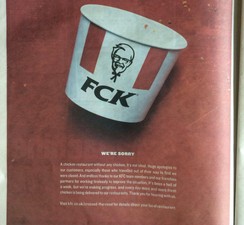 It went down a storm. Why? Because when a huge, faceless brand accepts and owns its mistakes, it makes them appear more human, which is the connection we want to feel with them.

The Snickers ‘typo’ campaign was another brilliant example of how to humanize your brand. Working with Google to identify 500 of the most commonly misspelled words and their derivatives, Snickers placed ads at the top of search results with a clever caption:

Admitting weakness might seem counter-intuitive, but it resonates with an imperfect audience who also have their flaws and faults.

But what about the ads that we think are genuinely just not that good? Sometimes, it’s down to something as simple as a different opinion.

How many times have you either muted an ad or changed the channel out of pure displeasure for its quality or content?

Midday TV ads are the worst for this – they remind me of being off school sick with nothing else to watch except Jerry Springer or Homes Under the Hammer.

You know the type I’m talking about – the friendly and super-presentable call-center agent having the most robotic conversation with an older person about their life insurance policies, where ‘for just $15 a month your funeral costs will be covered and we’ll throw in a free pen and a signed photo of Michael Parkinson’.

Why do I have such an aversion to these ads?

Nothing Ventured Nothing Gained

No one can predict how a campaign will perform. You’ll only really know if something’s bad or not by doing it. A/B testing would be a particularly useful strategy here, running two different ads to your audience to see which performs better and then refining it.

But there is a way to mitigate the losses you’ll incur in testing, and that’s by having a foundation of clean, refined data to start with.

That’s especially the case with online ads, where you have a whole host of invalid traffic ready to saturate and skew your results.

Lunio provides you with an exclusion list of over 60,000 identified threats. We’ll help you root out the sources of invalid clicks, the king of ad budget obliteration, and build a protection strategy to ensure your potentially ‘bad’ ad has all it needs to be just that.

Strategy
25 Best Online Marketing Tips And Tricks From The Pros