No matter what social media you use, you can’t escape the millions of memes that are posted daily.

Known for their funny and unique humour, these memes that started off as inside and funny jokes, are now being used by brands to boost their social media following.

In fact, memes are so popular that there are even plenty of social media profiles that are dedicated to just posting funny memes to their followers.

With the ability to go viral and increase brand exposure, these memes are now being utilized by many brands as their core social media strategy. Although, not every brand that uses them has been successful.

To show you the power of meme marketing and how brands are capitalising on this marketing strategy, we’re taking a look at some excellent and not so excellent examples of these memes.

By the end of this article, you’ll have a good idea of what meme marketing is, why its so beneficial, and how you can make your own effective memes.

Before we dive into the benefits and examples of marketing with memes, let’s take a quick rewind and a closer look at what memes are.

A meme (pronounced meem, not me me) is a concept, joke or catchphrase that is shared online for humorous purposes. Most memes usually take the format of an image, but they can also be videos or just text.

Memes have been around since the early-mid-1990s when the internet was becoming popular but in recent years have exploded and show no signs of stopping.

These memes often take certain formats based on the joke and are re-made and shared by other users who continue the trend. One of the first memes that became popular in the early 2000s is this owl which was often used as a response in online conversations.

Now you’ve got a good idea of what a meme is, why are they so useful when it comes to marketing?

The Benefits Of Meme Marketing

When it comes to marketing, there are plenty of benefits of memes that allow them to connect with audiences much better than traditional methods.

One of the best benefits of memes is that they are very easy and cheap (mostly free) to make. With plenty of free online meme creators available, unlike other methods of advertising, you can create a whole range of memes for free which greatly increases your chances of a return on investment.

Aside from being able to create these memes on a whim without any real planning required, these memes also have a great chance to go viral. Going viral is the scenario that every brand and business dreams of.

Not only does it greatly increase your brand exposure, but it can also drive a huge swarm of traffic to your website.

Unlike other types of marketing out there, memes are specifically good at targeting the younger generation with their sometimes weird and confusing jokes.

To give you an idea of how brands are using memes to great success, here are some of the most successful meme marketing examples in recent years.

Known for its large online social media following, Netflix currently has over 6 million followers on Twitter and 61 million likes on Facebook. But that doesn’t stop them from growing their audience with funny memes.

One of the most recent examples of a successful meme marketing campaign from them is their campaign for the movie Bird Box.

Produced and released on Netflix as one of their Netflix original movies, the movie was promoted via social media using a range of funny and viral memes such as the one below. 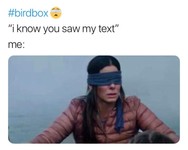 Due to the swarm of memes around the release of the film, lots of users were exposed to the memes, many of which had never seen the film before. With so many jokes and constant memes (many of which you had to have watched the film to understand), this convinced a lot of users to finally give it a watch.

BarkBox is a monthly subscription box that is full of toys and treats for dogs.

With over 300k followers on their Twitter page and 3 million likes on their Facebook page, BarkBox has managed to grow its audience using a range of relevant and dog-related memes. Here are some of their most successful memes from their Twitter page.

Unlike other brands and businesses out there, BarkBox understands their audience very well and produce a range of dog-related memes that their followers are sure to love.

Instead of constantly spamming users with their product (like many brands do), BarkBox has managed to find that fine line of humour and product placement within their memes.

Apple needs no introduction when it comes to marketing. With a marketing budget of billions of dollars, they seemingly don’t even need to post on social media to get people to buy their products.

In recent years the most popular Apple product hasn’t been their mobile phones or laptops, but their AirPods. These wireless earphones have become a huge hit with consumers and have even become a status signal like with most Apple products.

Around the time they where released, there was a huge storm of memes on Twitter and other social networks highlighting the price. Although some could argue these aren’t funny or not showing the product in a good light, the amount of exposure and free advertising they got is worth it.

Here are some of the memes that were being shared around the time of their release on Twitter. 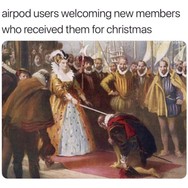 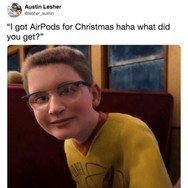 Although it’s not 100% clear if these memes were created by Apple or user-generated, the memes have still had a big impact on their brand exposure. Not only did they reach millions of users worldwide, but they also became an even more desirable item leaving them being sold out in most Apple stores worldwide.

Just because meme marketing has a low barrier to entry, doesn’t mean that it’s easy to replicate the success. In most cases, meme campaigns will often flop and leave the brand looking embarrassed and out of touch with their audience.

To give you an idea of what bad meme marketing looks like, here are some not so good examples that left users scratching their heads rather than smashing that retweet button.

Ruffles produce a range of crinkle cut potato chips (or crisps) in America and have been around since 1961. In the hopes of trying to join in on some viral and popular memes at the time, Ruffles created this terrible meme and posted in on their Twitter page.

To many, it might be hard to understand why this is so bad, but the main problem is it’s not that original or that funny.

The result is very low engagement from their audience when it could have had much more if they just put a bit more time and effort into it.

McDonald’s needs no introduction as one of the largest and most popular fast food brands in the world. Known for their TV ads, McDonald’s also has a large social media presence divided by different regions.

In this bad example, McDonalds UK has taken a meme from 2015, used the wrong meme format and basically embarrassed themselves in front of the 200k followers.

To make things even worse, to all the meme fans out there, this meme doesn’t even make sense. Based on the “say no more fam” barber meme, the original meme format shows a funny haircut and a picture or character of what it resembles.

However, in McDonald’s meme, it doesn’t show any haircut or anything of the sort, leaving users a bit confused as to what the joke is. It’s safe to say that the McSteak was a mistake.

How To Make Your Own Memes For Advertising

Luckily, getting into meme advertising isn’t as hard as it sounds, you just need to keep up to date with the latest meme formats and give them your own twist.

From the examples we’ve shown above, there are plenty of different meme templates and formats to choose from, you just need to find the best ones for your brand. This can vary depending on what type of product or service you are selling, but overall, most meme formats can be adjusted to fit almost any product.

Once you’ve researched and found a good meme format, you can use free online meme generators to create the perfect meme for your social media accounts. Here are some of our favourites and the easiest to use:

The chances are you’ve already used Adobe’s products in your life at some point, whether it be Photoshop, Illustrator or InDesign to name a few. To add to their product range, Adobe has recently released a new platform called Adobe Express which is specifically made for creating social media images. From banners to cover pictures, Adobe Express comes preloaded with plenty of templates to take advantage of.

Our personal favourite is their free meme maker which quickly allows you to drag and drop elements to make memes in record time. 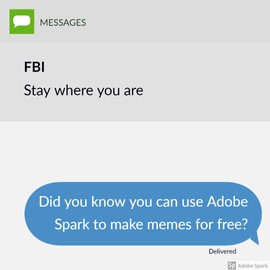 Once you’ve made your meme and posted it on social media, it doesn’t end there. Checking the levels of engagement and reaction is crucial to understand what your audience likes.

High engagement is usually a good sign it’s working, while little to no engage could be due to a number of reasons. Instead of giving up after the first attempt, you should at least try a few different formats and different memes to see if any of those results are better.

Now you have a good understanding of memes and how brands use them to increase their brand exposure, what are you waiting for? Get out there and make some original and quality memes to share with your audience!

Strategy
12 PPC Formulas For Google Sheets Not In Excel